Home » conference » programme » abstracts » The Swallow Flies Swiftly Through: An Analysis of Humanist

The Swallow Flies Swiftly Through: An Analysis of Humanist

We’re 14 years old now, a venerable age in this medium, like everything else somewhere between coming into being and going out of it, ‘like the swift flight of a single sparrow through the banqueting-hall where you are sitting at dinner on a winter’s day with your thegns and counsellors. In the midst there is a comforting fire to warm the hall; outside, the storms of winter rain or snow are raging. This sparrow flies swiftly in through one door of the hall and out through another. While he is inside, he is safe from the winter storms; but after a few moments of comfort, he vanishes from sight into the wintry world from which he came.’1

HUMANIST has been one of the few stable discussion spaces where people in the digital humanities can discuss the field. The metaphor of the swallow flying though the banqueting-hall captures what we would like our commons to be, warm and comfortable compared to the winter outside, and a feast of methods, ideas, and conversation. This paper will fly though the hall of HUMANIST on the wings of analytical methods. Specifically this paper will take a retrospective look at the evolution of the digital humanities through an analysis of HUMANIST using Voyant, a suite of web text tools we have developed for handling large corpora like this. In the paper we will therefore,

Why look back now?

In the space of a very few years the digital humanities seems to have gone from a marginal field trying to gain respect to a favorite of many university administrators. Digital humanists now need to define (and justify) what the digital humanities is to people who ask us – instead of trying to explain it to anyone willing to listen. It is difficult to pin down exactly when this transition happened, but one important moment was when William Pannapacker wrote in the Chronicle that ‘Amid all the doom and gloom of the 2009 MLA Convention, one field seems to be alive and well: the digital humanities.’ He continued with ‘the digital humanities seem like the first “next big thing” in a long time’.2 As John Unsworth noted in his ‘State of the Digital Humanties, 2010’ address to the Digital Humanities Summer Institute (DHSI), when a field is perceived to have jobs (while other humanities fields are seeing a dramatic decline) ‘it’s bound to attract some notice, especially among bright, goal-oriented graduate students who are approaching the job market.’3 As universities try to get into the game by posting not jobs but clusters of jobs, and graduate students try to adapt to those jobs, issues of definition and self-definition became important.

Alternatively this self-conscious turn could be due to funding agencies noticing and creating programs for the digital humanities like the Image, Text, Sound and Technology program of SSHRC that first made awards in 2003-4 and the Office of Digital Humanities programs of the US National Endowment for the Humanities. We shouldn’t underestimate the degree to which funding programs can get attention.

The self-conscious turn can also be seen in papers looking at the field and asking about it. Some examples include a paper by Wang and Inaba presented in Taipei and then published under the title, ‘Analyzing Structures and Evolution of Digital Humanities Based on Correspondence Analysis and Co-word Analysis.’4 Another is by Patrik Svensson titled ‘The Landscape of Digital Humanities.’5 Both essays provide a ‘birds-eye’ view of the field, though in very different ways. Wang and Inaba use text analysis and text mining techniques to ask about the shift from ‘humanities computing’ to ‘digital humanities’; Svensson takes a cultural studies approach looking at the actors and discourse.

Like Wang and Inaba our method is to use DH methods like correspondence analysis, but we analyzed a different, messier and fuller text, the archives of the HUMANIST listserv. HUMANIST is a discussion list that was started by Willard McCarty when he was at the Centre for Computing in the Humanities at the University of Toronto in 1987. The first message introducing the list started with, ‘HUMANIST is a Bitnet/NetNorth electronic mail network for people who support computing in the humanities.’6 The list is still running, and, except for an interlude of a few years, is still moderated by Willard. HUMANIST has limitations that will be discussed in the full paper, but it provides a rich text for understanding the field in the English-speaking world.

Voyant, formerly called Voyeur, is a suite of text analysis tools that can be used individually or combined into ‘skins’ on texts that you upload or link to.7 Voyant is a second generation of web analytical tools that benefited from lessons learned by HyperPo and TAPoR. Our first generation of tools could only handle smaller texts (up to about 500K or the equivalent of a book or two) and therefore weren’t suitable for the study of large corpora. These tools were also developed as close (re)reading tools in a context of literary study of a single text or small corpus. In this project we adapted Voyant to handle the sort of corpus that allows us to do diachronic analysis and distant reading; we added mining tools that facilitate the formation and validation of hypotheses.

Part of our methodological practice is to develop a series of hypotheses about the last 25 years of Humanist. These are then tested, adapting and adding features to Voyant as needed. The tool development is thus deeply integrated with the analytical process. We will use the hypotheses and unexpected themes to discuss our flight through the corpus.

We started with the expectation that there had been a shift from ‘humanities computing’ to ‘digital humanities’ as discussed by Wang and Inaba. While we certainly found ‘digital humanities’ taking off in 2004-5, we were surprised that ‘humanities computing’ continues to be a popular phrase. What is harder to do is to pinpoint why the term started to be used. One of the limitations of a public list is that it is suitable for epidemiological studies that tell you what happened and what correlated with what happened, but it is harder to tell what motivated people to change how they named the field. 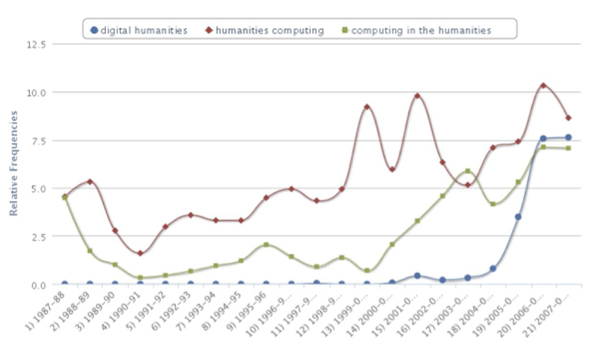 The Passing of Centers

A second hypothesis we started with was that the 1980s and 1990s had been a time of centers that made computing available in labs, but that the field had moved on to a more distributed project model. We did not find evidence for this. While the word project becomes more popular and it is true that some centres has closed, we found others had started up. Perhaps our particular experience with certain centers closing biased us into thinking this was a larger phenomenon.

The Turn of the Web

The most dramatic evidence of change was so obvious that we didn’t think about it or hypothesize it until we developed a tool that could show clusters of years and keywords using correspondence analysis. 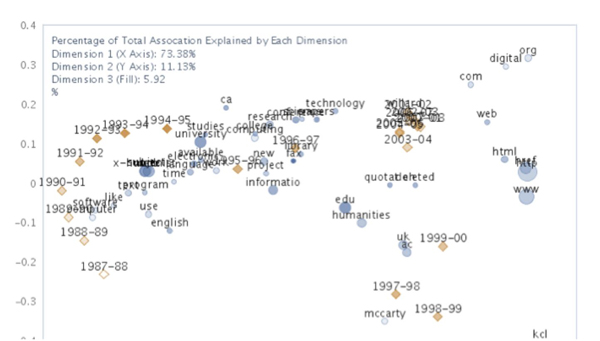 The scatterplot display of the major dimensions generated showed a strong pull of patterns like ‘web’, ‘www’, and ‘html.’ There seem to be three phases in the data studied: 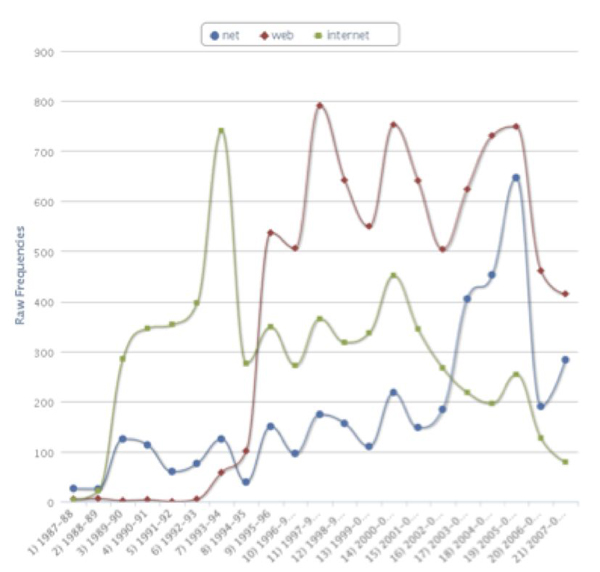 We believe the use of the web by humanists in the mid 1990s was a transformative for the field and may explain why less and less of our discussion was about hardware and software. 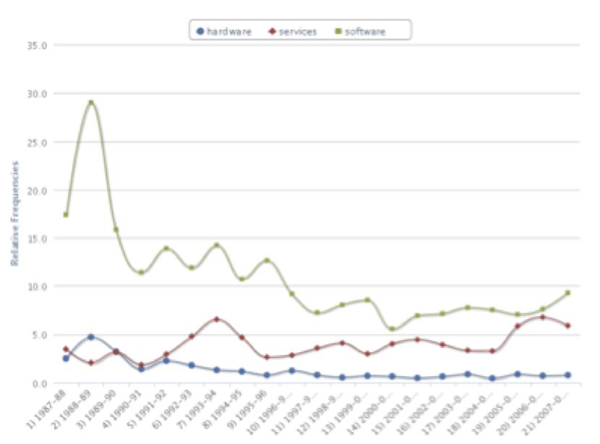 As computers became ubiquitous in the 1970s and 1980s, humanities computing was concerned with supporting the new hardware and software. HUMANIST itself was initially conceived as a discussion list for those who supported others. Many humanists in 1986 were just beginning to use computers for word-processing and most didn’t have email. With the web as a canvas for digital projects we started to pay less attention to ‘processing’ and more to ‘methods.’ We began to make our own tools after the hard work of developing scholarly electronic texts. Above all we returned to ‘content’ going beyond text to look at other ‘media’ and the ‘social.’ 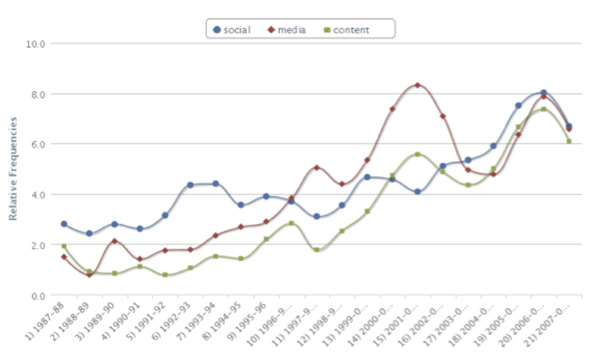 The new-found traction of the digital humanities in academia is an opportunity to reflect on how the discipline has evolved and what it has become. Our contribution here is twofold: 1) a reading of HUMANIST that can help understand who we are and 2) a presentation of text analysis in practice. Of course, this is just our fly-through the corpus; with accessible web archives and tools like Voyant, the hall is open.