This paper will present the project Digital Mellini: Exploring New Tools & Methods for Art-historical Research & Publication, a joint initiative of the Getty Research Institute (Los Angeles) and the University of Málaga (Spain). This paper shall discuss several aspects and challenges related to the development of digital resources for art-historical research.

The main objectives for the Digital Mellini Project are:

These objectives can be seen within the framework of the recent growing interest that many of us in the art-historical community have in response to the challenges offered by the digital society – we need to analyze and reflect critically on the ‘digital status’ of the discipline of art history from both the methodological and epistemological perspectives. We must be willing to open innovative and creative paths in the design of digital resources for art-historical research – paths that will lead to new lines of investigation and new methods of and attitudes toward information-sharing.

Art historians must participate in the development of tools in the Digital Humanities. In an article published in the Chronicle of Higher Education in 2009,

Johanna Drucker pointed out that many of the critical debates that have characterized the development of the humanities in recent decades – subjectivity of interpretation, multicultural perspectives, a recognition of the social nature of the production of knowledge, etc. – are absent in the design of digital resources. Instead, more emphasis has been placed on adapting to the characteristics of digital media than to the epistemological and interpretive exigencies of the various humanistic disciplines.2 Lev Manovich made similar observations in a Digital Humanities conference held in June 2009 in Maryland, when he asked, ‘Is it sufficient to borrow techniques from the fields of computer science, information visualization and media art – or do we need to develop new techniques specific to the humanities?’ (Manovich 2009: xv).

Regarding the hope that Digital Humanities will assume this new role, we perceive the need to build environments that are intellectually productive and will facilitate interpretive and critical studies above and beyond simple information systems designed for the storage and retrieval of data.

The Digital Mellini Project is a response to these challenges, as the aim of the project is to contribute to the development of virtual research environments (VRE) to promote critical research in the field of art history.

The Digital Mellini Project includes another desideratum that has emerged in recent years: the production of knowledge based on aggregation and collaboration. The culture of open, shared knowledge, which was already being promulgated by UNESCO as early as 2005 as a fundamental way to transition from the information society to the knowledge society, along with the possibilities offered by Web 2.0 technologies, is an essential factor within the evolution of digital scholarship.

There are already several projects oriented toward the development of collaborative environments (NINES3, The VRE-SDM Project4, The Transcribe Bentham Project5, etc.); and there is a burgeoning bibliography on this topic (Deegan & McCarty 2011). Proof of this interest has also been shown by the high percentage of presentations that dealt with this problem in the last Digital Humanities conference, held at Stanford University in June 2011.

Electronic publications and digital editions are not new in the realm of Digital Humanities; the first reflections on what an electronic edition might be appeared in Finneran (1996) and Bornstein and Tinkle (1998). There are also reflections and proposals relating to collaborative editions of unpublished manuscripts in which a dispersed community of scholars could add annotations, as in the case of the Peirce Project (Neuman et al. 1992) and the Codex Leningradensis (Leningrad Codex Markup Project 2000).

Nevertheless, as Susan Hockey (2004) states in her summary of the history of Digital Humanities, ‘The technical aspects of this are fairly clear. Perhaps less clear is the management of the project, who controls or vets the annotations, and how it might all be maintained for the future’.

Similarly, the Digital Mellini Project intends to continue this line of research, addressing the questions that still remain open and launching new ones, cultivating debate and reflection.

The Digital Mellini Project focuses on a particular text, an unpublished manuscript written in 1681 by Pietro Mellini, a Roman nobleman. This text belongs to the Getty Research Library, Special Collections, found under the title Relatione migliori di Casa delle pittura Melini. Pietro Mellini poetically described the best works as he inventoried the collection of his family’s paintings. This text carries a self-interest for art historical research due to its uniqueness – it is the only document known to date that has a hybrid composition of ekphrastic description in poetic form with a factual descriptive inventory. In addition, it is an important source for studies related to collecting, the market valuation of art, the provenance of collections, etc. Most of the works are unidentified and to analyze their possible allocations through the descriptions provided by Pietro Mellini is a very attractive task for art historians. Lastly, this text gives us an opportunity to explore the possibilities that digital media offers to deepen the relationships between text and image. One of the objectives of the critical edition is to establish hypotheses about the identity of the works described within the manuscript.

To carry out this critical collaborative edition, the Digital Mellini Project is developing a computational prototype. Exploring the possibilities of Drupal, a digital environment is being designed and conceived specifically to this analytic objective. Currently, the project team has completed an alpha version of the digital workspace. The first prototype of a beta version is expected to be finished by the end of 2012.

This prototype was constructed around the object of the critical edition, Mellini’s text, and it includes: 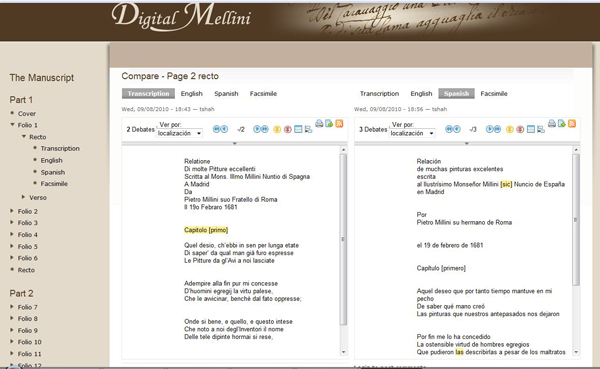 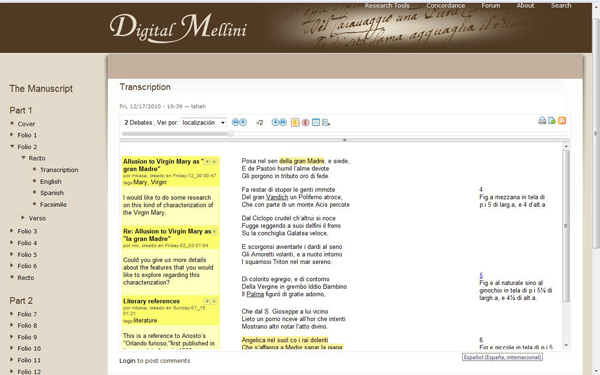 Note, therefore, that what is proposed as a digital critical edition is far from the conventional academic model of a print publication, which would exist in a static format as the end result of an interpretive study. The result may have been made ​​by one or several specialists, but in the end, what we find is the proposal of one particular interpretation. It is also far from the digital editions that fit this model (eg Van Gogh Letters Project) or electronic repositories focused mainly on the analysis and exploration of texts (The Orlando Project-History of British Women’s Writing). The proposed model is multifaceted. Digital Mellini simultaneously integrates multiple and sometimes contradictory and paradoxical views. It is open and dynamic. Due to processing system records and the dialogue between specialists in the critical annotation process, we can reconstruct the interpretive process itself, as aggregation and contributions grow over time. Therefore, the digital edition is not only the end product of a study and/or research, but also the intellectual and interpretive process through which it unfolds.

In the digital edition, in addition to showing this prototype and its performance, we will address in more detail the intellectual and methodological questions that confront us while developing a resource of this kind, taking into consideration the goal of advancing digital scholarship in the field of art history and the Humanities in general. These topics include:

Finally, the conclusive question: how can the discipline of art history move away from single authorial models toward more open, collaborative models of research and publication?

Bornstein, G., and T. Tinkle (1998). The Iconic Page in Manuscript, Print, and Digital Culture. Ann Arbor: U of Michigan P.

1.Nevertheless, interesting research has been carried out on linking images to text. See Zweig 1998

2.‘Many humanities principles developed in hard-fought critical battles of the last decades are absent in the design of digital contexts (…) For too long, the digital humanities, the advanced research arm of humanistic scholarly dialogue with computational methods, has taken its rules and cues from digital exigencies’ (Drucker 2009).