A flexible model for the collaborative annotation of digitized literary works

The Complutense University has been one of the first European universities that has collaborated with Google’s  project1 by putting on the Web 100,000 volumes from its ancient fund. However scholars notice that these digitized texts are often of no much use to professors-researchers-students in literature unless additional tools are provided, to enhance the educational and research value of this material. In particular, the ability of making annotations on these texts has been largely recognized as a basic mean of adding value to this kind of digitized resources (Rios da Rocha et al. 2009). In this paper we present the annotation model used in @Note 1.0, a system developed at UCM funded by the Google’s 2010 Digital Humanities Award program.

@Note 1.0 allows us to retrieve digitized works from Google Books collection and add annotations to enrich the texts with research and learning purposes: critical editions, reading activities, e-learning tasks, etc. One of the main features of @Note annotation model, which distinguishes it from similar approaches (Azouaou & Desmoulins 2006; Bechhofer at al. 2002; Koivunen 2005; Rios da Rocha et al. 2009; Schroeter et al. 2006; Tazi et al. 2003), is to promote the collaborative creation of annotation schemas by communities of researchers, teachers and students, and the use of these schemas in the definition of annotation activities on literary works. It results in a very flexible and adaptive model, able to be used by many different communities of experts in literature defending different critical literary theories and for different annotation tasks. In this paper we present this annotation model.

Structure of the model

The structure of the @Note annotation model is summarized in the UML class diagram (Booch et al. 2005) of Fig. 1. In this model: 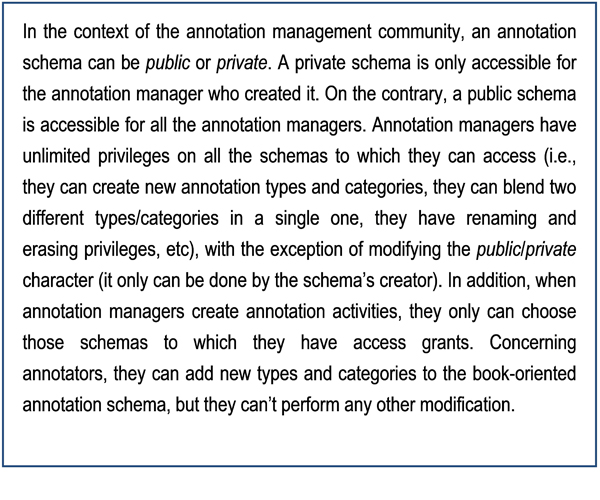 The @Note annotation process governs how to create the different types of information elements envisioned in the annotation model. For this purpose, @Note introduces a set of rules governing aspects like information visibility, creation and modification privileges of annotations and annotation schemas, etc.  Although, by lack of space, these rules will not be detailed here, in Fig. 2 we include an example concerning an informal description of some of the rules governing the management of annotation schemas.

Annotation schemas in @Note are seen as T-boxes of description logic theories (Brachman & Levesque 2004). For instance, Fig 3a shows, edited in @Note, a fragment of the annotation schema used at UCM in an English Literature introductory course, while  Fig 3b despites the description logic’s counterpart. This simple interpretation is still powerful-enough to enable powerful annotation browsing and annotation recovering behavior. Indeed: 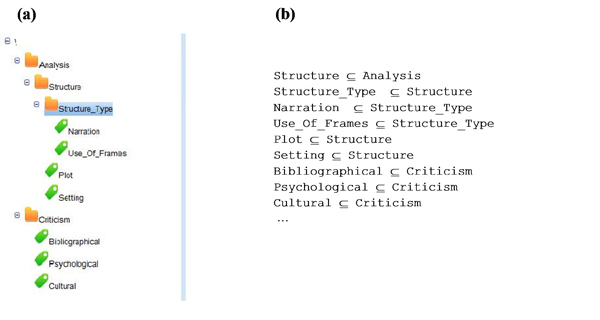 Figure 3: (a) A fragment of annotation schema (b) description logic counterpart

In both cases, since entailment will be performed according to the description logic principles, the process will take into account the is-a relationship made explicit by the annotation schema.

The system has been entirely developed using Google technologies for the development of Rich-Internet Applications (RIAs) (Fraternali et al. 2010): GWT in the client side and the Google App Engine’s facilities in the server side (Unruh 2010). Fig. 4 shows some snapshots of the system. The current version runs on the fully free-access books integrated in Google Books, and, in particular, on the UCM-Google collection. The works retrieval is achieved by the use of the Google Books API through REST (Richardson & Ruby 2007), and then presented to clients in an asynchronous way to keep them responsive to their events. 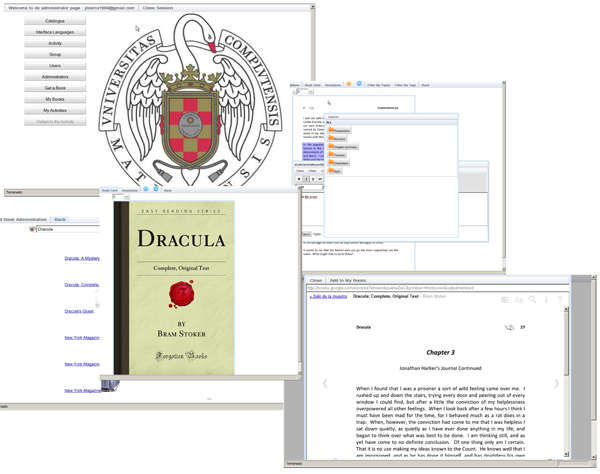 Figure 4: Some snapshots of @Note

@Note promotes a fully collaborative annotation process, in which not only literary works are collaboratively annotated, but also annotation schemas are collaboratively created. The @Note system has been evaluated at UCM by several researchers and students in literature. They highlighted the flexibility of the annotation model, and, in particular, the ability to create and share annotation schemas tailored according to different critical perspectives and annotation activities. Additionally, they appreciate a sufficient expressive power from a browsing and recovering point of view. They also remarked the educational potential of the tool, although some advanced features could add some conceptual difficulties for students.

Currently we are working to adapt the annotation tool in order to facilitate its connection to a repository of learning objects, so as to allow the storage of literary texts’ annotations as learning objects (Polsani 2003), and to make possible the recovery of those annotations and move about them according to the associated metadata. Thus, we are developing a communal working space for the creation of written compositions in different traditions and languages. We are also experimenting with the students’ capability for developing their own catalogues, annotating the literary texts according to them and reusing their annotations in the production of critical essays. Additionally, we are working on connecting our system with other digital libraries (in particular, with Hathi Trust2). Finally, we are planning to address interoperability issues, in order to enable the interchange of annotations according to some of the emerging standards proposed by the digital humanities community (e.g., OAC3).

Polsani, P. (2003). Use and abuse of reusable learning objects. Journal of Digital Information 3(4).