The Differentiation of Genres in Eighteenth- and Nineteenth-Century English Literature

The title of this paper has changed, because our effort to answer one question (about linguistic register) exposed a larger question with broad relevance to literary study, and indeed to the definition of ‘literature.’

To start where the process of inquiry actually began: what happened to English poetic diction around 1800? William Wordsworth’s claim to have brought poetry back to ‘the language of conversation in the middle and lower classes of society’ in Lyrical Ballads has long been represented as a turning point in literary history. Given the weight attributed to this claim, it is surprising that scholars haven’t tried to test it. Did the language of poetry actually become more formal or specialized in the eighteenth century? And if so, did the change reverse itself around 1798? Finally, was this phenomenon restricted to poetry, or was it a broader transformation of diction that affected other genres as well?

We are increasingly in a position to answer questions like these. True, we can’t ask eighteenth-century English speakers to demonstrate ‘the language of conversation in the middle and lower classes of society.’ Moreover, standard contemporary tests of difficulty (like the Flesch-Kincaid Readability Test) are not very applicable to earlier periods, because they rely on sentence length. Practices of punctuation have changed over time, making the average sentence steadily shorter from the seventeenth century through the twentieth.

It is more practical to assess the formality of diction. This assessment is particularly easy to make in English because of an important peculiarity of its history: English was for two hundred years (1066-1250) almost exclusively a spoken language, while French and Latin were used for writing. Any English word that survived this period had to be the kind of word that gets used in conversation. Words that entered the language afterwards were often borrowed from French or Latin to flesh out the learned vocabulary. Even today, the distinction between these two parts of the lexicon remains an important aspect of linguistic register. For instance, Laly Bar-Ilan and Ruth Berman have shown that contemporary spoken English is distinguished from writing by containing a higher proportion of words from Old English. Moreover, this differentiation between writing and speech increases as students enter high school, where they also learn to use a greater proportion of words from French and Latin in formal expository prose than they do in written narrative (Bar-Ilan & Berman 2007).

If learned and informal registers were distinguished this way in the thirteenth century, and the same thing holds true today, then one can reasonably infer that it held true in the eighteenth and nineteenth centuries as well (for further evidence, see DeForest & Johnson 2001). Thus an etymological approach to diction can show us how the ‘register’ of a given genre changed across time, becoming more conversational or more formal. 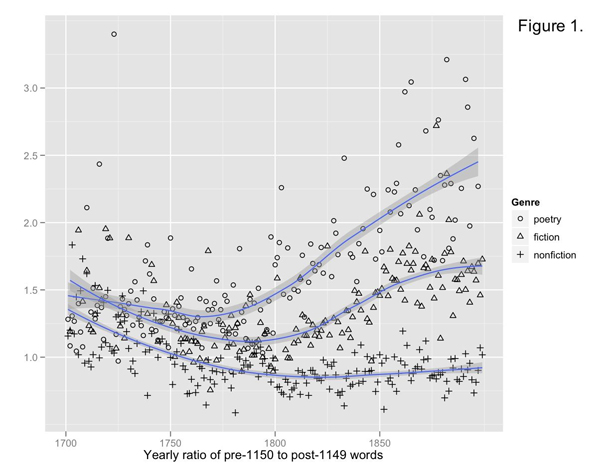 We have explored this question in a collection of 3,724 volumes. The eighteenth-century part of the collection was manually keyed by ECCO-TCP; the nineteenth-century part of the collection was digitized by OCR, but has been corrected with a fuzzy-matching script that has a machine-learning component and is extensively optimized for nineteenth-century OCR (our strategy was based on Lasko & Hauser 2002). More importantly, the comparative logic of this inquiry largely factors out the false negatives produced by imperfect OCR.

Instead of distinguishing ‘Germanic’ and ‘Latinate’ diction, we have used the first attested date for each word, choosing 1150 as a dividing line because it’s the midpoint of the period when English was not used in writing. But date-of-entry of course correlates strongly with the Germanic/Latinate division. One can in fact simply measure the average length of words and produce very similar results (the correlation between the pre/post-1150 ratio and average word length is usually -.85 or lower). We exclude a generous list of stopwords (determiners, prepositions, conjunctions, pronouns, and the verb to be). The reason is that, as Bar-Ilan and Berman point out, ‘register variation is essentially a matter of choice’ (15). There is usually no alternative to stopwords, so they may not reveal much about register. We also exclude abbreviations, proper nouns, and words that entered the language after 1699.

The results of this inquiry do suggest that the register of poetry took a new turn in the late eighteenth century. In the course of the nineteenth century older, pre-1150 words became dramatically more common in poetry. It is reasonable to infer that poetic diction became more familiar and less overtly learned. But this particular detail is hardly the most striking fact about Fig. 1. What’s salient is rather a broader process of generic differention from 1700 to 1899 that affected prose fiction and nonfiction as well as poetry. In the year 1700, these genres each had their own peculiarities of diction, but they didn’t belong to sharply distinguished registers of the language. By 1899, they did. The ratio of pre- to post-1150 words became almost twice as high in prose fiction as in nonfiction, and almost three times higher in poetry. This suggests that the story usually told about Wordsworth may be misleading: far from rebelling against specialized poetic diction, he was producing a manifesto for a style that was – less recondite, to be sure – but also more sharply differentiated from prose.

This result matters, more broadly, because it bears an interesting relationship to the emergence of ‘literature’ as a distinct cultural category in the same period. In the early eighteenth century, ‘literature’ could encompass anything read by the middle and upper classes, emphatically including nonfiction. By the end of the nineteenth century, ‘literature’ was a category sharply distinguished from nonfiction prose, and valued for special aesthetic qualities. If this conceptual shift was also accompanied by a systematic transformation of diction, we may be able to learn something about the nineteenth-century concept of ‘literature’ by paying close attention to the way diction changed.

To start a debate on this topic, we will present an argument with two parts. First, we will show that the differentiation of genres was not merely a matter of linguistic register. When we compare genres in a more general way (using metrics like Spearman correlation and cosine similarity) it remains true that poetry, fiction and, to some extent, drama became steadily less like nonfiction prose in the period 1700-1899 (for the rationale behind these metrics, see Kilgarriff 2001). 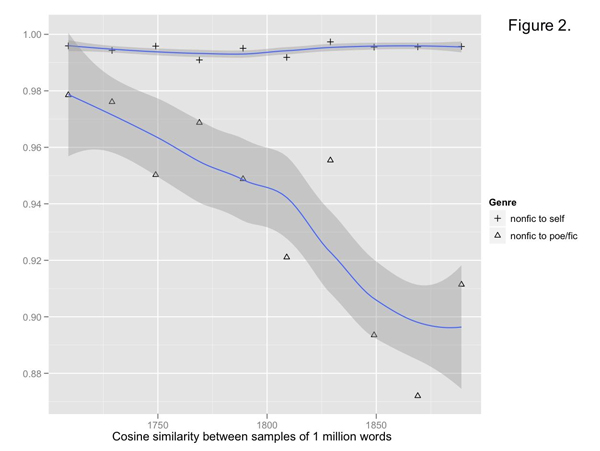 Second, we will begin to interpret the meaning of the divergence, by examining lists of words that became relatively more (or less) overrepresented in literary genres over this period. Briefly, we will suggest that the transformation of literary diction dramatizes a transformation of the logic of cultural capital. In the eighteenth century, literary diction explicitly thematized the social status associated with fine writing (‘muse,’ ‘pomp,’ ‘taste,’ ‘applause,’ ‘genius,’ ‘merit,’ ‘talents.’) In the nineteenth century, literary diction became more concrete, to be sure, and less explicitly learned – but it also tended to disavow the social in favor of a pure subjectivity embodied, for instance, in nouns and verbs of perception (‘listened,’ ‘heard,’ ‘looked,’ ‘felt,’ ‘dream,’ ‘eye’). We propose that this emphasis on subjectivity and immediacy in fact dramatizes a mode of cultural capital associated with literature’s autonomy from other institutions (Ross 1998). We don’t pretend to have proven that hypothesis. There is room for a great deal more study and argument. We do, however, claim to have shown that the diction of poetry, fiction, and nonfiction prose differentiate from each other over the period 1700-1899 – a puzzle that will need some kind of explanation. We offer the puzzle itself as an example of the way text-mining is already beginning to shape debates in literary history and critical theory.

DeForest, M., and E. Johnson (2001).The Density of Latinate Words in the Speeches of Jane Austen’s Characters. Literary and Linguistic Computing 16: 389-401.

Ross, T. (1998). The Making of the English Literary Canon. Montreal: McGill-Queen’s UP.