Myopia: A Visualization Tool in Support of Close Reading

Although the term ‘myopia’ typically has negative connotations, focusing on what is nearby is not always a bad idea. Literary critics value what they call ‘close reading’, the process of carefully reading a poem or other literary work word-by-word and line-by-line in order to analyze how different features of the text – sound, syntax and rhythm work together to create meaning. Through close reading, literary critics hope, the reader might eventually succeed in uncovering hidden connotations. Typically, multiple readings are necessary to understand the structure of a literary work and to unearth multiple meanings, especially in the case of poetry. Only then can the reader perceive the poem’s prosody. A non-abstract, enhanced visualization of the metrical, syntactical, and sonic structures of a poem can greatly ease this laborious process.

There has been a recurrent effort to develop text visualization and visual statistical tools to better understand the underlying structures of chosen textual resources. Some of these tool suites provide opportunities for exploration and collaboration in area of textual analysis [5,6,9,10]; others are more narrowly focused on comparison of plain or encoded text, across versions [3, 7]. Despite attempts to do so these digital tools have not resulted in significantly easing the process of close reading [2]. The side-by-side method of highlighting differences is not conducive to spot connotations and analyses, and thus does not help in fully exploiting potential of digital tools in literature.

At Miami University, we are developing the Myopia Poetry Visualization tool to facilitate display of a multidimensional representation of TEI [8] encoded poetry and text. Presenting an interactive visual representation of differently encoded versions of text, the Myopia tool seeks to amplify understanding and uncover new knowledge in the context of close reading. The tool currently is used to visualize text from The Poetess Archive currently moving to Texas A&M University. The Poetess Archive includes a database of electronic documents encoded using the TEI (Text Encoding Initiative) schemas [8] extended with the Poetess Archive tag-set that has been derived from widely used terms in literary analysis and criticism. Even though one schema is used, a schema extended from the TEI schema, the elements of a poem that are interesting to literary scholars have been formalized as tags and attributes based on XML standards. But the tags relevant to any single poem must be spread across multiple documents. XML by its very nature is hierarchical, and these hierarchies cannot overlap within an XML document. The elements of prosodic structures of poetry however do overlap: a metaphor might begin in the middle of one poetic line and end in the middle of another. Different features thus need to be encoded in separate XML files making a composite analysis difficult. Moreover, the XML representation of literary texts is suitable for machine processing and electronic exchange of information, but it is not intuitively comprehensible even by those scholars who know about poetry and would be most likely to adopt an XML encoding system. A tool which fuses TEI encodings spread over separate files into a single visually integrated document could help overcome the limitations of encoding literary texts in XML. We are developing a visualization tool that seeks to integrate multiple encodings while allowing comparative analysis of multiple poems encoded using the extended TEI tag-set. The proposed solution is an interactive visual representation of differently encoded versions of text that can enhance cognition, and aid in uncovering of new knowledge. This approach facilitates identification of frequently changing hotspots in encoded text and aids in the process of close reading.

Close reading means reading a poem word by word and then repeating the process line by line in order to explore sound, syntax, tropological figures, and the meter or underlying rhythm of the work. The reader might eventually succeed in uncovering hidden connotations. Multiple iterations are necessary to understand the structure and thus to unearth meanings from a poem. Only then is the reader in a position to describe underlying prosodic elements in literary text. A non-abstract, enhanced visualization of syntax and sound structures of a poem can greatly ease this laborious process.

The brain’s capacity to rapidly process visual information, and discern visual patterns forms the basis for any visualization. Pirolli and Card developed a theory of information access to help designing interfaces to visual cognitive tools. People follow a scent as they forage for information, making just-in-time decisions about which path to follow [11]. An ideal cognitive loop between a computer and human would require the computer providing exactly the information needed at any given time. Thus only relevant information should be on screen, allowing users to forage as they explore the interface. In the Myopia tool, the cost of visual queries is reduced by the minimal layering of visual information, a layering that users can control.

The effectiveness of a given visualization is directly related to the properties of the mapping between the raw data and its rendering. In general any mapping should allow the user to access the underlying data, so that he or she can be assured that the visualization actually relates to the source data being rendered. In our visualization tool the textual content of the encoded poetry being visualized is always available to the user. The ability to revert to the source text at any stage of the visualization from abstract graphical mappings is a conscious design choice that we made in building our tool, and we believe that allowing users to see the text enhances the tool’s effectiveness [12]. Myopia employs a direct representation of textual content overlaid with graphical metaphors to aid in literary analysis of poetry.

The Myopia Poetry Visualization tool has been developed in Python and utilizes open-source Python libraries for rendering multidimensional graphics integrated with an intuitive user interface. The framework used for multidimensional graphics is called Panda3D, which was developed at Carnegie Mellon University [4]. It is useful to mix two-dimensional interface design elements with higher dimension graphical design elements. Navigational controls should always be visible and accessible to the user. In the Poetry Visualization tool the two-dimensional Graphical User Interface (GUI) elements are created using the wxPython framework.

We are conducting user studies to evaluate the effectiveness of our approach in helping the process of close reading. To achieve this objective we utilize the Pre-Experimental Design methodology known as Pretest-Posttest Experiment design ex- plored by Campbell, Stanley et. al. [1]. The experiment seeks to measure the effective- ness, adequacy and usability of the Myopia Poetry Visualization tool. The research questions of the study seek to determine the three aspects of the tool: its effectiveness, its adequacy, and its usability.

versions of text, the tool seeks to amplify understanding and uncover new knowledge. This tool will facilitate identifying hotspots in an encoded text and will visualize the attendant changes in areas of interest across various TEI documents: a poem may be most interesting metaphorically in one line, but metrically it may be more interesting in another. The goal is to help scholars analyze the original documents in new ways and explore information visualization as a rhetorical device in literary criticism. The contributions of this research are in the areas of Information Visualization and Digital Humanities. The purpose of the research is to support reading literature closely using information visualization. This will facilitate abstract analysis of literary texts by fusing multiple perspectives. 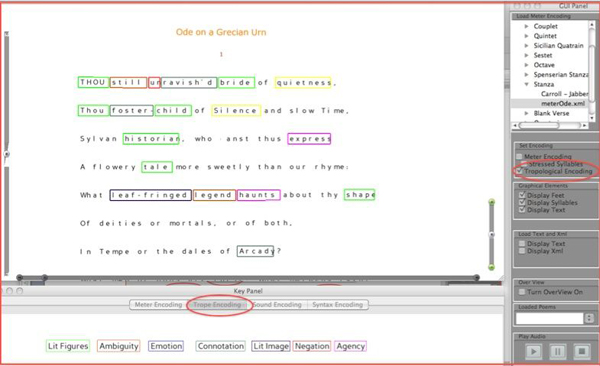