In late 2009, with funding from the National Endowment for the Humanities, the Scholars’ Lab at the University of Virginia Library began development of Neatline, a tool with which students, scholars, and archivists can express the geo-temporal dimensions of literary or historical collections: http://neatline.org/.  These expressions take the form of customizable, highly interpretive, interlinked, and interactive web-based timelines and maps. They are built using open-source software and standards-based approaches to geospatial data, and they permit scholars to draw heavily on digitized archival content and standardized metadata created by cultural heritage institutions. That said, each use of Neatline is imagined as a carefully-designed narrative or exhibit – a subjective story told in time and space through small-scale interpretive decision-making, rather than (as is more commonly pursued in our era of ‘big data’) an algorithmically-derived or data-driven geotemporal information visualization. In the broadest terms, Neatline is conceived as a contribution – in the visual vernacular – to multidisciplinary, place-based scholarship using primary sources.

This paper describes: 1) the theoretical goals of Neatline, including a role for iterative sketching (or graphesis) and hand-craftedness in digital interpretive toolbuilding; 2) the decision-making process which led us to architect Neatline not as a stand-alone tool, but as a set of mix-and-match plugins for Omeka, an open-source platform for online collections and exhibits; and 3) preliminary assessment of ongoing work on the project, undertaken since 2010 as a partnership between the Scholars’ Lab at UVa Library and the Roy Rosenzweig Center for History and New Media at George Mason University.

As an NEH-funded prototyping project, Neatline made three claims to innovation or to a shifting of the landscape of geo-temporal visualization in the humanities.  First, by building on primary resources expressed in EAD (Encoded Archival Description) metadata – among other standards, such as VRA Core – Neatline creates a pragmatic path for collaboration among metadata providers and scholars. Although EAD has long been employed by academics working in concert with archivists, as in the Walt Whitman Archive, its use has typically been straightforwardly bibliographical, as a finding aid or for the production of catalogs of manuscripts and letters. EAD has rarely been used as a stepping-stone to rich, interpretive or theory-based expression (much less visualization) of the content of those primary resources. The Neatline project aims to demonstrate the value of archival metadata to interpretive scholarship, and thereby strengthen connections among scholars and collections stewards.

Next, Neatline aims for ease of use by scholars new to the digital humanities. This was a major argument in our bid for NEH funding, and our rationale for shifting from development of a stand-alone, downloadable tool (installable as a single, server-side application), to a functionally atomized array of interchangeable plugins for Omeka (http://omeka.org) is arguably the most important contribution of the project to the current scene of humanities computing software development. Neatline was imagined as a self-contained, self-service, single-function tool that nonetheless allowed expert users easy access ‘under the hood’ to customize and contribute to its open source code. For a stand-alone tool, this would have been the right approach; but we quickly realized that we had the opportunity to model a more productive and collaborative set of open source software practices. The Scholars’ Lab has now shared source code for 9 completed or in-progress Neatline-related plugins with the Omeka developers’ community, and Omeka forms the backbone for basic content management functionality in our project. We feel strongly that our shift to Omeka plugin production retains or enhances all of the desired qualities of our originally-proposed system, while adding two great benefits. First, Neatline has become mix-and match. In other words, no longer must users assent to the entire, ideal Neatline workflow in order to make use of our work – and in fact we are seeing great interest in and use of individual plugins in Omeka user communities and scholarly and archival contexts far removed from those interested in geo-temporal interpretation. Secondly, our close collaboration with the Omeka team and open source developers’ community is leading to advancements in the core code of Omeka itself, again benefiting a far wider audience than we anticipated. Not only were we able to leverage Omeka as a technical and social framework for Neatline, but our work has made the system a more attractive option for research and special collections libraries – even those with sophisticated technical and repository infrastructure of their own.

Finally, Neatline makes a theoretical contribution to the digital humanities by emphasizing hand-crafted visualization as a mode of praxis and scholarly inquiry. (This is a practice we have, after the experimentation of the UVa’s former ‘SpecLab’ thinktank and the scholarship of Johanna Drucker, called graphesis.) Low-tech sketching and storyboarding is regularly taught as part of the earliest design processes for digital projects in the Scholars’ Lab. A side effect of our work is to demonstrate the value of iterative interpretation and knowledge-production manifested in visual form – particularly within fields like history and literary studies, in which interpretation of visual artifacts is rarely taught and drawing is infrequently modeled as (in William J. Turkel’s formulation) ‘a way of knowing.’ We have emphasized this by designing drawing and editing interfaces that are relatively simple to use and nearly identical to a finished, end-user’s view. In Neatline, scholars are always sketching, erasing, and sketching again their arguments on the screen.

Subjectivity in space and time is a matter of interest in Neatline. Our map and timeline-related plugins (in progress) are designed to offer users the ability to model multiple backgrounds or alternatives independently from the foreground of their critical attention, and express all of these fields and their interrelation visually. The spatial and temporal foreground stands as a place for scholarly commentary, including textual annotation as well as intervention in the visual field by means of the freehand drawing of lines and shapes. Meanwhile user-specified Neatline backgrounds can be empirical or unabashedly subjective – precisely geo-referenced or wholly speculative.  For example, one local test case, which we will demonstrate, uses the maps and letters of U.S. Civil War cartographer Jedediah Hotchkiss.  GIS (Geographic Information Systems) layers are brought into Neatline from modern satellite imagery, from scans of Hotchkiss’s own surveyed-and-drawn battlefield maps, and from the historical atlases that served as the surveyor’s mental ‘base layer.’  Against these, we have georectified an informal, child’s-eye map Hotchkiss drew in a letter, to allay his young daughter’s concerns about his welfare.  Neatline allows all of these documents to be plotted and annotated in space and time.

We will describe not only the theoretical basis of the project, but its concrete products, including improvements to the Omeka codebase and the creation of a suite of open-source plugins. Most of these plugins are usable independently but gain value in combination, comprising the Neatline system.

1. EAD Importer: allows for the easy and easily-adjusted import of Encoded Archival Description metadata into an Omeka exhibit.

2. Neatline Maps: provides map display through one or more GeoServer instances or through any specification-compliant WMS service.

In addition, our work on Neatline led us to develop five further plugins which users may employ as part of their Omeka exhibits. These plugins greatly extend the capacity of Omeka and make it a more attractive option not only for end-users, but for better-resourced libraries, digital humanities centers, and cultural heritage institutions – the constituency best positioned to contribute further development time to the open source code of Neatline and Omeka alike.

1. FedoraConnector: makes it possible to display, comment on, annotate, and otherwise employ objects inheriting behaviors from a Fedora Commons repository.

4. TeiDisplay: allows users to render TEI files in HTML format and attach them to Omeka items. This plugin integrates with SolrSearch for indexing.

The project continues under the rubric of an ‘Omeka + Neatline’ partnership with the Center for History and New Media, funded through 2013 by the United States Library of Congress, with a next major code release planned for January 2012. DH 2012 in Hamburg will coincide with the release of Neatline demonstration projects and end-user documentation at http://omeka.org.

Neatline operates on archival metadata – itself already an interpretation of a literary or historical collection – to allow scholars to illustrate connections among documents and the spatial and temporal dimensions that arise through their reading.  In this, it embodies a theme of much work in the Scholars’ Lab: that method is a path to argument, and that interpretive digital humanities scholarship may be best enacted in iterative, visual modes. 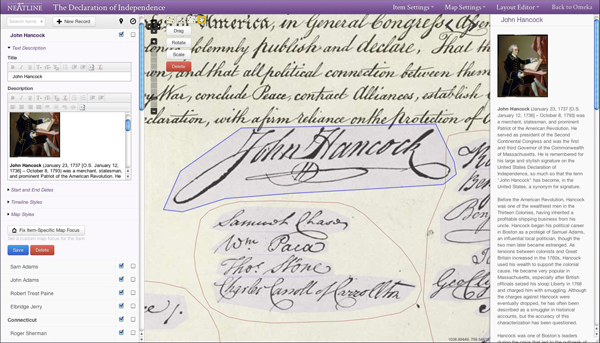 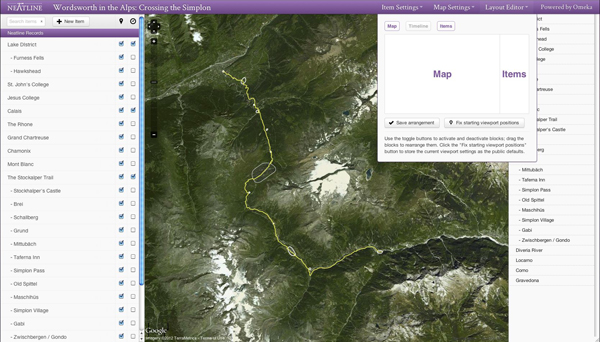 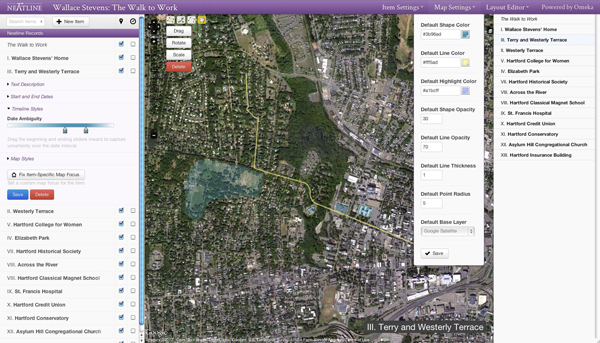 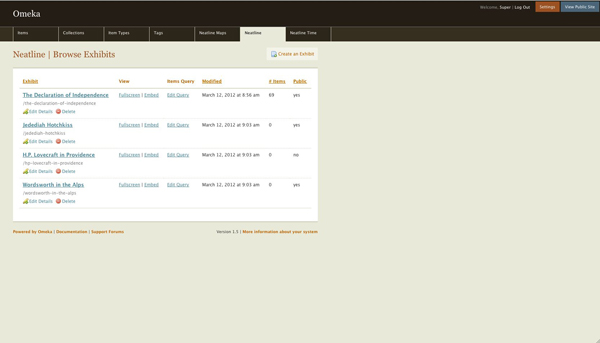 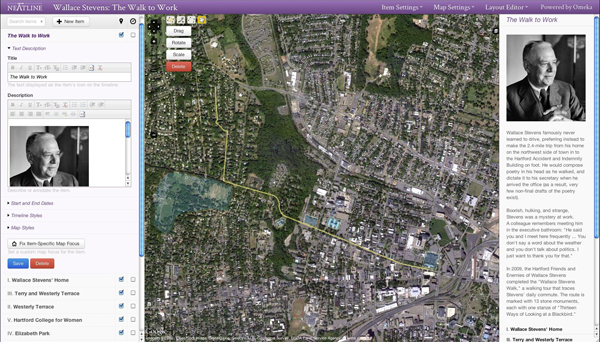 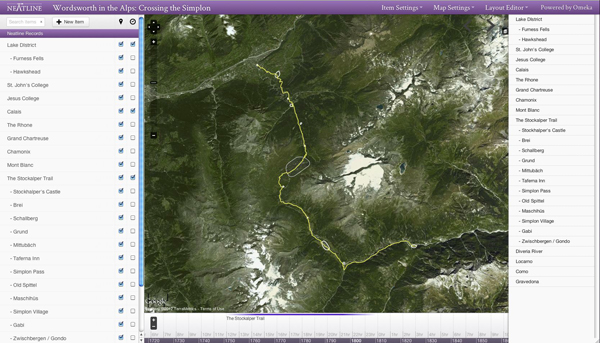 Catapano, T., K. M. Price, and K. Walter (2005). The Walt Whitman Archive: Archivist-Scholar Collaboration in Description and Representation. Joint International Conference of the Association for Literary and Linguistic Computing and the Association for Computers and the Humanities, Victoria, British Columbia, 2005.