Digital editions with eLaborate: from practice to theory

However creative and inventive scholars may be, it is extremely difficult to contemplate all possibilities and consequences of digital editions without actual hands on experience in a digital environment in which such editions can be created and experimented with. For this and for other reasons, eLaborate was developed by the Huygens Institute for the History of the Netherlands, an institute of the Royal Netherlands Academy of Arts and Sciences. eLaborate is an online research environment in which scholars can create an edition of a text, individually or in a group. They can upload scans of the manuscript or printed book they want to edit, transcribe the text using a zooming and panning tool, write annotations to the text, categorize these according to their own needs, and publish the edition online with minimal interference of IT developers. eLaborate version 3 was released in the Fall of 2011. eLaborate3 is built on a new IT architecture, because the wishes and needs of users of eLaborate1 (2005) and eLaborate2 (2009) could not be accommodated in the technological framework that was chosen as the base at the start of the first project in 2003.

For more information about the changing organizational practices that arise in a collaboratively made edition, we refer to (Beaulieu, van Dalen-Oskam & van Zundert [to be published] and Pierazzo 2008). In this paper, we will focus on the edition itself, taking as the subject of our case one already published online digital edition made with eLaborate2.

The example we take is Marjolein Hogenbirk’s edition of the Middle Dutch Arthurian romance Walewein ende Keye (‘Gawain and Kay’), published online at http://www.waleweinendekeye.huygens.knaw.nl/ (Hogenbirk 2009). The most prominent representation of the edited text is per column in the manuscript. See for example 182ra (http://www.waleweinendekeye.huygens.knaw.nl/path/editie/kolom/182r/182ra#). eLaborate shows the facsimile of this column, the transcription, and at the far right all the annotations to the transcription are listed. The user can adjust the placement of the facsimile in its panel and zoom in, change the width of the panels (cf. Fig. 1), or click panels away to give the other panels more space.

The freedom of customization available to the user goes even beyond this. The key here is the ‘Options’ button in the top right of the screen, where the user can adjust the display of abbreviations: show these in italics, or show these in roman font (in the example they are shown in italics). Another choice concerns line numbers: the user can choose the line numbers of the current edition as well as that of an earlier edition, or choose not to see any of these (in the example only the line numbers of the current edition are shown). The other Options-tab enables the user to choose which of the annotations to see (Fig. 2). The edition of Walewein ende Keye has three different annotation categories, which are marked with three different colours in the transcription panel. Hovering over them with the mouse makes the content and categorization of the specific annotation visible. All annotations are visible in the right hand panel. But the user can deselect those categories that need not be visible for now. When deselected, they immediately disappear as coloured markings in the transcription panel and from the list in the right hand panel. 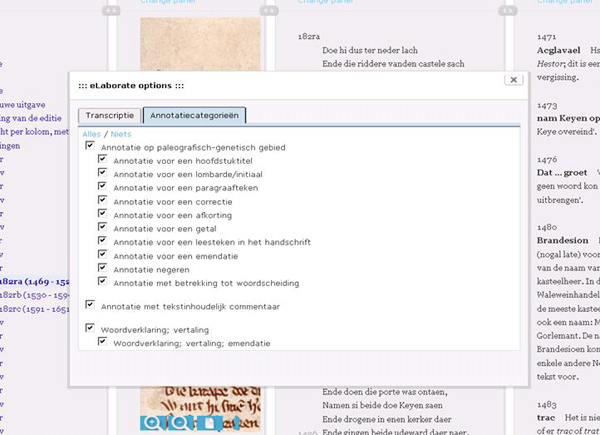 The editor has of course added markings of abbreviations, line numbers, and annotation categories in the work environment. This leads us to a very important new basic point of departure or principle for digital editions derived from current practice: everything that is explicitly marked in the edition should be easily made invisible on the fly by the user, whereas it is impossible for the user (as well as for the editor himself) to add non-systematical information on the fly. The occurrence of medieval abbreviations e.g. is unpredictable and therefore cannot be added by current technology correctly automatically. The same goes for the general presentation of the edition. The edition was made column for column, and chapter headings were marked. Therefore it can also be viewed chapter by chapter (‘Overzicht per hoofdstuk’) or as a complete text (‘Volledige tekst’). Should the editor have chosen for a complete text only, the column presentation would not have been possible.

How practice leads to new theory

Simple as this new guideline may seem, it leads to a more theoretical reflection on the nature of digital editions in general and on its possible future(s). For example, we could also apply the principle to more fundamental levels. Based on a.o. funding possibilities, an editor of medieval texts until now had to choose for which audience he would prepare the edition. A diplomatic edition for linguistic and literary scholars, with the exact spelling as in the manuscript or print and with abbreviations marked in italics? Or a critical edition for students, with adaptation of spelling, interpunction and capitalization, and with solved abbreviations? With limited funding the last option usually seemed best. But a critical edition closes the edition down for certain kinds of research. Spelling and interpunction are changed and therefore cannot be researched anymore. This also makes it much more difficult to establish the probable date and location of writing. Such a ’closed-down’ edition has only limited usability and limited influence on the general progress of knowledge. It can even introduce difficult-to-check mistakes that could do harm (cf. van Dalen-Oskam & Depuydt 1997).

Can we address both scholarly users and students in one and the same digital edition without closing down the edition? The basic approach seems to be that the text in a form as close as possible to the source is the basis of all types of representations and that almost all kinds of interpretations by the editors are kept separate from this basic text. The editor transcribes the words or signs diplomatically, for instance the word auenture ‘adventure’. The word could receive an annotation that the critical representation of this word is aventure (generated automatically if the editor has run a parser for lemmatization and part-of-speech tagging, having confirmed or corrected the results). The form of the added knowledge would be very different from now, but still depends on the expertise of the editor. Ofcourse we do need a user-friendly way to add all these layers of interpretation to the base text. It is clear that the stand-off mark-up approach as advocated by a.o. (Schmidt 2010) is a necessity to make this work. And then perhaps another problem can also be addressed. What if we have several versions of a text and we want to reconstruct the version as it may have functioned at a certain point in time? If we make one edition with one reconstruction, other kinds of research would again be excluded. So we need to experiment whether we can add a separate layer to editions based on the different manuscripts, with its own annotation categories, which could generate the text in the selection and the order the scholar needs. The user could then toggle between a representation of the original sources and the reconstructed text (van Dalen-Oskam, under review).

Should this be possible, text and interpretation will be separate for ever, making sure all kinds of research are still possible on (different representations of) the same digital edition. But the role of the editor as analyzing, reconstructing, and validating knowledge remains as firm as ever – with a much higher level of reusability.

Beaulieu, A., K. H. van Dalen-Oskam, and J. J. van Zundert (to be published). Between tradition and Web 2.0: eLaborate as social experiment in humanities scholarship. In T. Takseva (ed.), Social Software and the Evolution of User Expertise: Future Trends in Knowledge Creation and Dissemination. To be published by IGI Global.

Pierazzo, E. (2008). Editorial Teamwork in a Digital Environment: The Edition of the Correspondence of Giacomo Puccini. Jahrbuch für Computerphilologie 10, http://computerphilologie.tu-darmstadt.de/jg08/pierazzo.html.

van Dalen-Oskam, K. (under review). All in one, one for all? A possible world of digital editions. Under review for Variants.